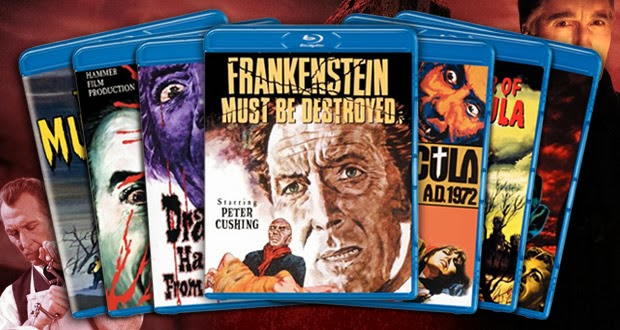 Our official librarian and good friend, Eric gave us the info on this yesterday.

We've sent out the message on Twitter, but in case you haven't seen it, Diabolique Magazine has started a petition on their website to bring some of our favorite Hammer films to the United States on Blu-Ray.

We've talked about these titles repeatedly on the show and as it turns out, Warner Bros. seems to be the cause for us not getting the films on Blu-Ray over here.

Well, maybe this is our chance to do something about it. Please click  here to sign the petition. Last time I checked, the petition had a total of 2,046 signatures on a goal of 10,000. Not too bad considering it's only been up a couple of days. Yesterday when I checked there were about 1,700. After signing the petition, make sure you scroll down to read a pretty great article by Bruce G. Hallenbeck on why these movies are so important to the genre.

As a side note, we were pretty excited to get a re-tweet and an actual response from Hammer films simply stating, "@ProfCushing Good show, old chap!" Where we really wish we could take the credit for starting the petition itself, we can't and won't pretend to. It's all on Bruce G. Hallenbeck and the crew at Diabolique. That being said, we'll do our very best to get the word out to support Diabolique and Bruce in this noble endeavor.

We hope you'll do the same.

WELLINGTON!
Posted by Crypt of the Macabre